It's been a long time now since the outfits reached absurd prices and they are not stopping.
Back in a couple of years you could buy a normal outfit around 80kk and a rare boss outfit for 150 200kk.

Nowaday even the average outfits start from 300kk up to 8 900kk!!!
This is getting really out of control and is very painful and hard to deal with the whole system, the sellers which get greedier at every gacha.
Not to mention that now gachas come every month instead of once every 3 months so it's really hard to save up a crap ton of gold more compared to the past and in a shorter time.

Nx price went from 1:1000 to 1:4000 and keep rising every month. Idk if that can be controlled and
i guess that depend also on the number of ppl selling and anyway most of us aren't really affected by that.

This situation is unbearable, and only goldbuyers can allow every month such prices every month.
Also for new players such prices are a nightmare and they would rather change game.

1) Check the economy of the outfits price on EU server cause while we don't have the same general inflation NA server have, we're getting close to their prices.
2) Consider about putting a price limit for nx items listed on marketplace (especially outfits cause the rest seems fairly balanced).
You already did the same with some low level in game items and other games like Black Desert have a price limit too (decided by devs) to avoid such situations.

3) Another suggestion is to transform those boxes which contain male and female counterpart of the same outfit type into an universal box that can be bought by everyone and it'll turn to the right gender outfit "only after opened".
You already did that with some free outfits so you know how to do it.

There're very often situations where the male counterpart of X outfit have a very affordable price, cause not much interest while the female cost 8 times more or so. They get both listed on mp but many male outfits stay unsold for months while if they were universal this would help to increase the supply for who have a female char. (80% of the server).

4) Consider about increasing the drop rate for female sets.

Doesn't matter which you choose as long you balance somehow this thing.
Just an example this month (but is not the first time it happen): 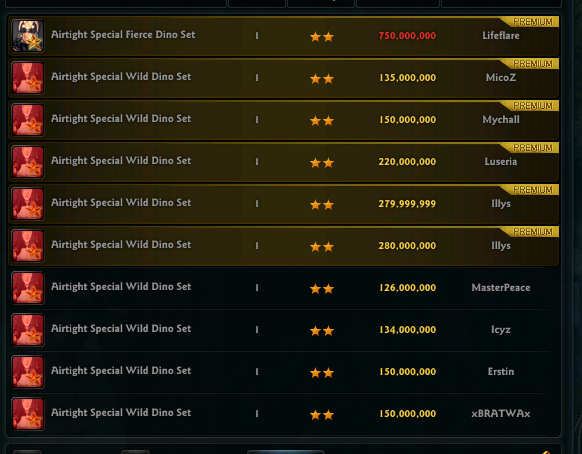 PLEASE do something about it..