I'l cover anything that isn't mentioned there.

It is located above the Mercenary Outpost in Colhen. 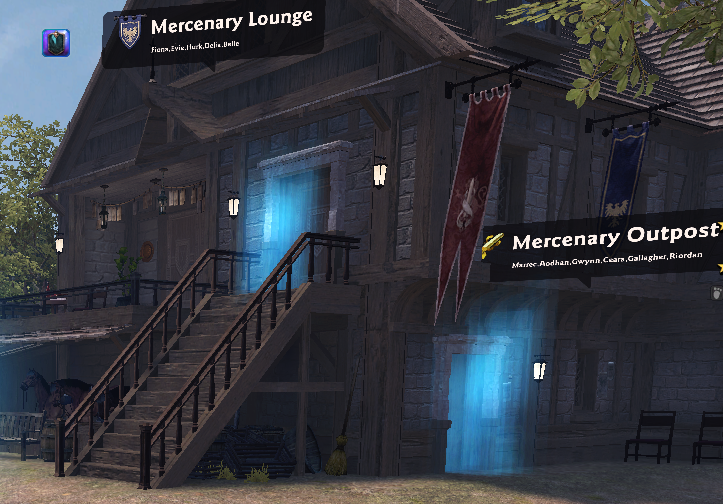 Captain Crimson is the dog at the Gift Shop/Mission board in the Lounge.

All 4 Missions count as "battles at your level" for events. They also cost 0 Fatigue each. So if you need to kill Normal Monsters without wasting Fatigue, this is where to do them.
Area 1 Colhen Night Patrol Mission has a little over 50 Normal Monsters guaranteed.

At the moment, increasing Closeness is only good for unlocking more dialogue and titles. So it is quite useless if you don't care for them.

There are currently 22 Titles to be obtained. (10 runs of each of the 4 missions for 4 titles, then reaching level 2 for all characters for 18 more titles)
In a future update, another 18 more Titles will be added for a total of 40 Titles.
15 for reaching level 3 with each character, and 3 more titles for having 5/10/15 Level 3 Allies.
(You will need a different alt to level up your main's character, then go back to your main to collect the title)

Click "Ally Friendships" in the top left corner of the screen while in the Lounge to see the Achievement Rewards.
As well as some achievements which give Friendship Seals (Give 50 gifts to each merc).
The progress towards completing these achievements are account shared, so if you want to complete the battle ones for free in 1 day, you can use different characters, then go to the one you want it on and collect.
All prizes to the achievements can only be claimed once per account. The titles are "ID Titles".

There's really no need to summon a merc, as you can cap the seals even if you fail all 5 missions each day.
It is only there so you can increase the Closeness of the mercs that aren't there.

Hold ctrl the entire time while clicking on chitchat to speed things up.

Most have seen these lists: 1 and 2
EDIT: add Lethor with Under the Cherry Tree
But since you can only buy the items and they cost the same, you can simplify it to just 6 items in your inventory to save inventory space if you buy in bulk for some reason. 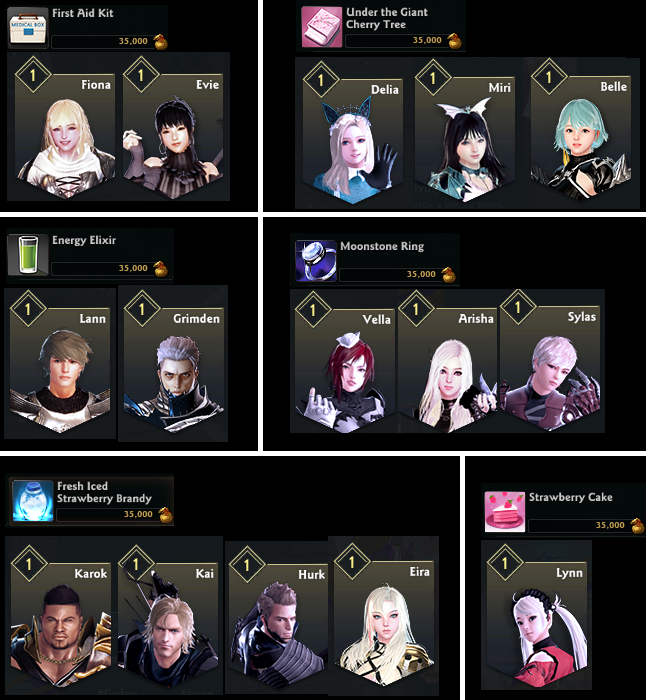 Note that there seems to be a (possibly) random chance for everyone to suddenly be uncomfortable if you talk to them near the end of the day. You can stop gifting if that does happen.

When you have not reached the limit: "You feel like you grew closer to [Merc]."
When you reached Chitchat limit: "There seems to be no change to the relationship between you and [Merc]."
When you reach the Daily limit: "[Merc] seems to have started feeling uncomfortable around you." (Doing more after it will not increase/decrease closeness.)

Haven't talked for a long time:
You feel like you've become more distant from [Merc].
You feel rather awkward now, as you haven't visited [Merc] in quite a while.

If you talk with a character's own # that was unlocked, there is a chance to get 20 Closeness or it just nothing. Seems random. The dialogue to unlock the topic has the same trigger.

Clears give 2 seals, fails give 1 seal. The moment you die, you fail, no revives allowed.
The fastest way to cap seals (5 seals) is to clear either modes in Mission 4.
The fastest lazy way to cap seals (5 seals) is to go into 2 or 4, then forfeit if it's not the kill boss version. Type /leave in chat instead of waiting for the forfeit button to load.

If you want to clear them for the title:

1. Ends when boss dies, don't bother with catapult due to limited rounds. Flinch/Kill mobs to protect the walls, high range characters such as Miri have an advantage in this.

2. Tell NPC to follow you to a chest, tell them to stand then gather items while you flinch all the mobs (can kill too, but flinch each is enough). Don't run too far ahead, make sure the NPC is following you, if you are too far away the NPC can't hear your commands.

3. There is no time limit, you can take as long as you want. I usually alt-tab out and let the npc do their thing, then come back and score just enough to win.
Hover mouse over the ? to see the enhance-to-points rate.

+5 can still fail even if you hit the blue area, so if you can win with all +4, go for it. But if you calculate that you need more points, get the minimum number of 5s. If you still need more, good luck, you'll likely lose.
Since it is luck based, this can happen.

4. Tell NPC to save the sheep while you flinch/kill mobs. If 5 sheep die, it ends with a fail.
The first sheep is close, you can pick it up and tell the NPC to pick up a second before the mobs come, securing sheeps 1 and 2.
You need to tell the NPC to pick up another sheep again each time they save a sheep.
I usually just flinch the mobs, pick up another sheep while they are flinched and bring it back at the same time as the NPC, securing sheeps 3 and 4.
Then just let the NPC get the last sheep while you flinch the mobs.

If you have Greater Werewolf Paw, you can use it at the start and grab 3 sheep (while the NPC grabs 2) and finish just as the effect of Paw ends.

Mobs currently respawn as soon as they die, which is why there isn't too much of a difference between just flinching or killing.
In a future update, there will be a delay before respawn.

Topics that can be unlocked

Note: #Coffer Chaser being unlocked in the initial meeting instead of #Vella is correct. You will see after reading the dialogue.
Lynn (2) and Lann's # does not unlock after additional dialogue.
Kai and Vella have one too.

All characters will have 9 unlockable topics, except for the aforementioned Lynn with 7 and Lann with 8. But you can't unlock your own character's #s on the same character, so:
Lann can unlock 124
Lynn can unlock 125
Everyone else can unlock 123

KR has another 9 for Lethor.

Topics are unlocked when enough Closeness is reached.
Note: non-bold #s are translated from Korean and may not be accurate or could be changed when localized.

Automatically obtained while talking to Lynn:
#Lynn
#Swift Assassin
#The Lost Kingdom
#Studies
#Song
#Wish
#Ruler
#King - Lynn is the proud princess of the lost kingdom and the rightful heir to its throne. 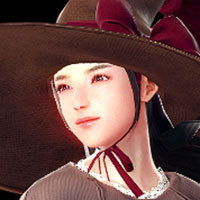