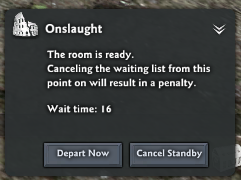 Then after the loading screen, there is no wait. So the match has already started for 10-40s by the time I load in. Then when the match is about to end, the timer is always wrong, 10-40s off because of that loading time.

Move the 20s to after the loading screen. Give people more time to load.

2) Every new boss that loads in freezes the game for a few seconds, regardless of having texture streaming on or off. I suspect that the game is loading the boss as it spawns. Other games preload the bosses outside the arena and move them into the arena to "spawn" them to fix this issue.

3) It is unfair for different classes, "Mark" based classes like Scythe and Glaive need to have their marks carry over to the next monster that appears.
Although rage was removed to balance out Greatsword, Bow and Spears, it is apparently going to return in a few seasons.
With Rage, Bow is literally so overpowered that a welfare +10 90 gear Bow can potentially out damage max gear full +15 players, and because of their range they can maintain Rage much easier than other classes.
At least make is so that Rage gives a set increase similar to Blessings, instead of a set 15000 Additional Damage at 1 HP regardless of how bad your gear is.
Also, the buff cap needs to be obtained at 2000 HP or something instead of 1 HP. So non-Greatsword/Spears can reach it without relying on a Life Flare.

4) Either remove titles from Onslaught, or when the season ends put the title into the Partholon Vanguard Ancient Title Destiny Box, or lower the requirements from 3000 points to 1500 points.

6) Allow people who dc to rejoin.

7) Ties are annoying to both teams. Have whichever team who was ahead before the points were 100-100 get the win.

8) The requirements to join are way too low. Useless people who die every 5 secs and do 1-2% damage can currently join.