A Guide to Glaive 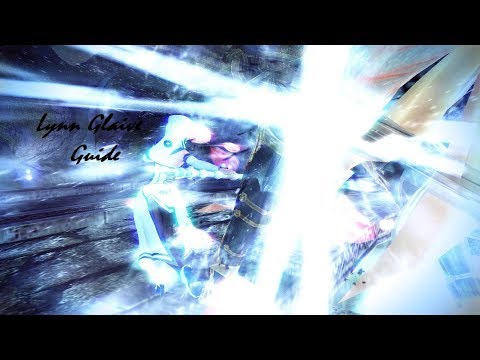 Skip the long Table of Contents, I forgot annotations were removed

Hello everyone! Here's a guide to playing our princess Lynn. This guide will mainly focus on Lynn's active skills and other possible tips.

Lynn is kind of like the hit-and-run type of play style. She is very easy to learn and you'll develop the skills quickly. The key to doing good damage with Lynn is being fast with well timed and precise attack, and a lot of practice of course. Her main damage output will come from her Swift Assassin skill, which are these blue or golden orbs of light that can be placed on bosses with her follow-up smash attacks. I'll explain these later. For now, let's go through her skills.

I'll start the list with her skills that I think are most important and go down to the least important.
Note: You don't start out with all these skills, so this list is more for when you do have them all.
Another note: I won't be including the passive skills such as Life Flare, or Strength, Agility, Willpower mastery, etc. It'll be more focused on her active skills with an exception of a few passives that you don't see in the skills tab.

We'll start off with her actives:
Little Rat
This is one of Lynn's defensive skills. To trigger it, you must press your dodge key while standing still. This'll have Lynn leap backwards and simultaneously swing her glaive. When timed correctly you'll "block" an attack and gain a passive buff called Wind Step. I'll explain Wind Step soon. Little Rat is also an attack, so as her glaive connects with the attack she'll "block" that attack. Lynn will also gain another passive buff called Furious Tiger or Zhen Furious Tiger (which will be explained later). Keep in mind that sometimes when you do use Little Rat too early, you might get hit since it doesn't give any invincibility frames.

Note on Little Rat: Little Rat is able to "block" some unblock-able attacks such as Havan's sand-mine AoE. As long as you time it correctly you will be fine.

Thunder Leg
This is Lynn's second defensive skill, which is her main dodge. This give's Lynn 0.42 seconds of invincibility frames at Rank A. She'll do a quick cart wheel and the invincibility frames will start kicking in when she leaves the ground. There's a short delay after using this skill, so you can't really dodge like a sword Lann. So be wary of bosses that have follow up combos.

Swift Assassin
This is Lynn's main damage output skill. You can stack up to ten Swift Assassin marks on bosses, which will be indicated as a passive buff (You'll see a little subscript with a number telling you how many marks are placed.) Now there are two different colored marks: Blue and Gold. Blue marks will do the most basic damage, but Gold marks deal 20% more damage compared to a Blue mark. When you do get a full ten stack of Gold marks, you'll get a passive buff called Full Bloom which means that your first Gold mark will do another additional damage, and it's a lot. You'll also get to stare in awe of the beauty of the explosions. Placing Gold marks is a little different process compared to placing a Blue mark. In order to place a Gold mark, you have to hit the boss with your Zhen smash attacks (indicated by a golden glow around Lynn). These Zhen smash attacks will be explained soon after this.

Five Fingered Death [insert joke]
This skill will allow Lynn to detonate the stacked up Swift Assassin marks that she built up. It can be triggered with the E key (it can be changed in the controls option).

Fishtail Pole
This is Lynn's follow-up second smash (LL-RR). This attack is a quick and easy way of placing a Swift Assassin mark(s). After her first second smash, Lynn will do a quick jab at the enemy. To trigger the Zhen smash, after the first smash attack (LL-R), if you hold the smash attack button for a quick moment, you'll see this golden light radiate from Lynn. You want to release the smash attack button at the moment the light appears. This will allow you to place a Gold mark on bosses. To know that you succeeded, golden lotus petals will emerge from the light. Or, if you have the damage indicator turned on, the numbers will be gold instead of red.

Note on Fishtail Pole:
- This is also the easiest skill to learn how to place Gold marks.
- The hit-box on this attack is very narrow, so it gets difficult sometimes when trying to hit small bosses like Iset. So practice a lot with this, and you'll get used to it.

Drunk Mantis
This is Lynn's follow-up third smash (LLL-RR). Her third smash attacks are one of her most mobile attack chains. I personally like using it in situations where I can dodge and attack the bosses at the same time using this skill. Just like Fishtail Pole, you can trigger the Zhen smash by momentarily holding the smash attack button, then letting go at the right moment.

Notes on Drunk Mantis:
- The timing for a Zhen smash with Drunk Mantis has the longest hold time.
- You can cancel this mid-animation with Little Rat.

Flying Guillotine:
This is Lynn's follow-up fourth smash (LLLL-RR). This is attack will be the preferred method to stack up Swift Assassin marks the fastest. This attack is actually two attacks in one movement, so it will place two marks instead of one. The first attack is when she does her mid-air spin, and the final attack is when she slams the ground. Just like the previous two skills, to trigger the Zhen smash, let go of the button the moment you see the golden light.

Notes on Flying Guillotine:
- The Zhen smash timing for this is slightly longer than Fishtail Pole but shorter than Drunk Mantis.
- The hit-box for this attack is also narrow, so hitting small bosses like Iset proves to be slightly more difficult. It's also difficult to hit mobs such as the winged Gremlins in Misty Summit, or reapers in Twilight Desert, like the raid boss Pantheum.

Some notes and tips on the Zhen Smashes:
- In order to be able to use the Zhen smashes, you need to have these skills up to Rank C. Once at Rank C, you'll be able to place the Gold marks.
- At first learn visually when to let go of the smash button. Once you get the feel of the timing, you usually can do it without having to look at Lynn, and be more focused on the boss.
- You can use Zhen smashes to replace Blue marks with Gold marks.

(Thanks to the several people who mentioned this to me)
- There's also the double click method, meaning, instead of holding the smash button to use Fishtail Pole, Flying Guillotine, and Drunk Mantis, you can click the smash button after using the smash attack prior to these. However, you still have to hold the button for a moment to get the Zhen smash in. I found this much more easier to use, compared to holding the button. If you're already used to holding the button rather than clicking again, like how I was, don't worry about it too much, but it does feel much better to use, at least to me.

Here's a nice video on how Lynn's Zhen smashes look like, as well as an attack speed comparison. This isn't my video, so credits goes to Dinny Forst 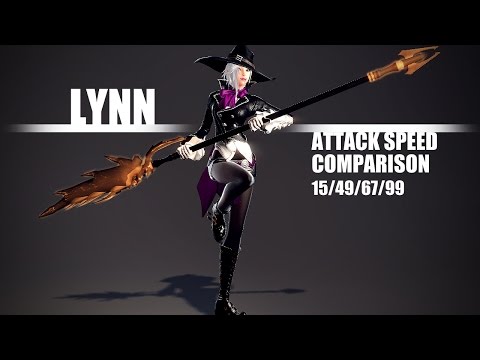