Lynn: Concepts and information regarding use.

General concept of using Lynn when you have all the skills unlocked.

When you don't have enough time simply using: Iron Monkey
Is understandable with either the first or both hits.

Divine Spear: makes Swift Assassin blue marks into gold ones for extra damage.
Chambers of Death does good damage for a low amount of meter and is easy to cancel out of.

Furious Tiger followed by Long Armed Devil is also used at times.
Jade Fox is useful if you have a lot of meter.
New players
Which skills are most important to get first.

1. Get every skill to it's second rank at first
2. Get Fishtail pole, Swift Assassin to rank A
3. Get Smash Mastery high level
4. Your able to max out every other skill eventually
Defense Moves

Little Rat
A quick hit followed by a long distance backwards leap that blocks most moves, can be used to safely gain distance.
When hit your able to press Space Bar again to teleport behind an enemy, useful for continuing combos from behind. Counter version must be used during a massive radius attack.


Swift Assassin
When landing a combo on the last hit it marks the enemy with a blue mark or a well timed gold mark.

1. Grants a very small instance of full protection of all boss moves.
2. Drains your sp meter fully.
3. Able to spam your moves multiple times for a tad less special meter.
4. Able to use Flying Snow move for very little meter as a finisher.

a. At level 40 go to pvp arena
b. Get up to 70 seals per week
C. Save up 200 seals for greater Cat Statue = 1 SP meter every 70 seconds
Location is at Rocheste Castle, behind the big water fountain. Chat with the guard to trade seals.
The pvp arena can be accessed by the small icon on the bottom left of your screen in most lobby locations.

Player versus player tip:
1) Combo LR can hit other payers into the air
2) Follow the combo with LLRR and the trigger move Five Finger Death and a last hit using Little Rat
3) Make use of Iron Monkey and PVP grab at times among other things
On enemies.

It is highly recommended to get the Greater Mysterious Cat Statue as soon as possible. On tougher basic enemies the move Divine Spear is highly advisable. Lacking a strong knock back effect Lynn can at least spam damage and bypass enemies with Divine Spear.

As for bosses if your taking damage you should be blocking, dodging or attacking at a different time. Includes simply ignoring a combo you already started just to make sure you don't clash into a hit when landing your own move.

This is doing as much damage as possible on bosses quickly.

"Chambers of Death" is a very close range move but deals high damage for this character.
Use normal attacks to get closer after jumping, it requires very close touching range.

I often use "Divine Spear" for lesser enemies. 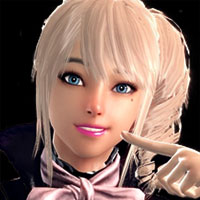