Vindictus Rep: 7,060
Posts: 981
Member
November 11, 2019 edited November 11, 2019 in Guidebook to Belle
Over the past years, leveling up a character in Vindictus as well as general progression has significantly changed - mostly to favor the player. Whether You are a new player, a long time returning veteran or loyal member - perhaps You'll find something useful for yourself when leveling any character, with extra tips for latest mercenary - Belle. If you don't feel like reading the whole thing: don't worry, got you covered - read only underlined parts.

You have just logged in the game and chosen the server - either North America or Europe, and set or inserted a pin (a secondary password). What you see now is a character selection screen, which at the time of writing is a campfire somewhere in the forest during the night. Your characters, if any, will be visible somewhere on the screen, enjoying their moment of peace before fate calls. You can click them directly or from the list on the right side, which also contains empty slots to create new characters. The slot may be Premium, which insignificantly increases obtained experience and looks cool.

Once clicking an empty slot, you will be taken to another selection screen, where each mercenary is previewed for you to make a choice. Some characters contain two weapons of choice, which become available after short while of playing. New players often ask who has the best damage and use this information to make their choice - this is subject to change with every update. Instead, choose a character that you will enjoy for a long time to come. It's not always easy, so don't hestitate to ask our community on official Discord server and watch high level late-game gameplay to decide.

Don't worry about character order on the list - it can be changed anytime by selecting a character and clicking the arrow buttons in bottom-right corner. 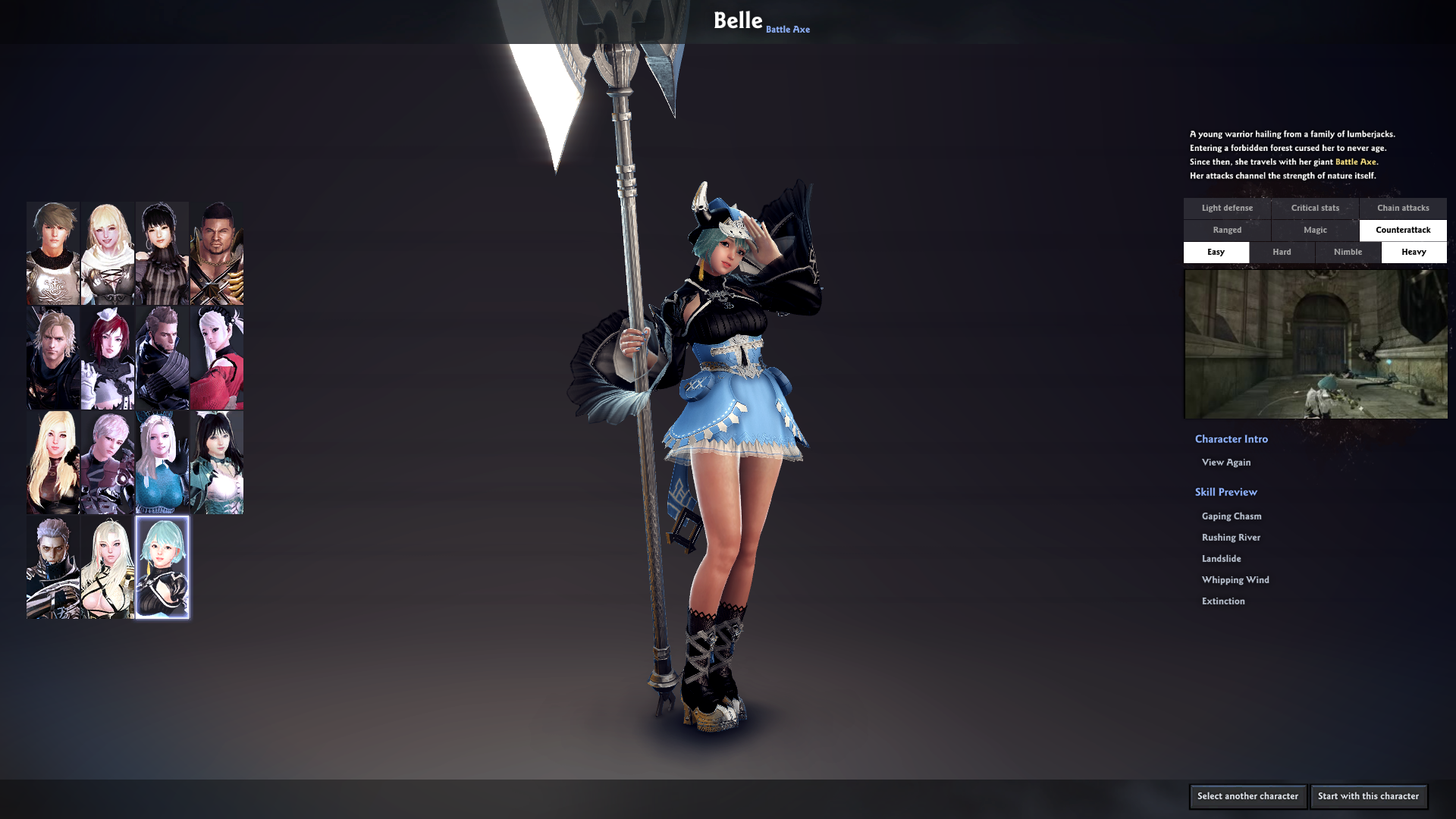 Regardless of your choice, leveling process is basically the same for every character. What differs are the details... details that I will try to cover specifically for Belle. Shall we begin? 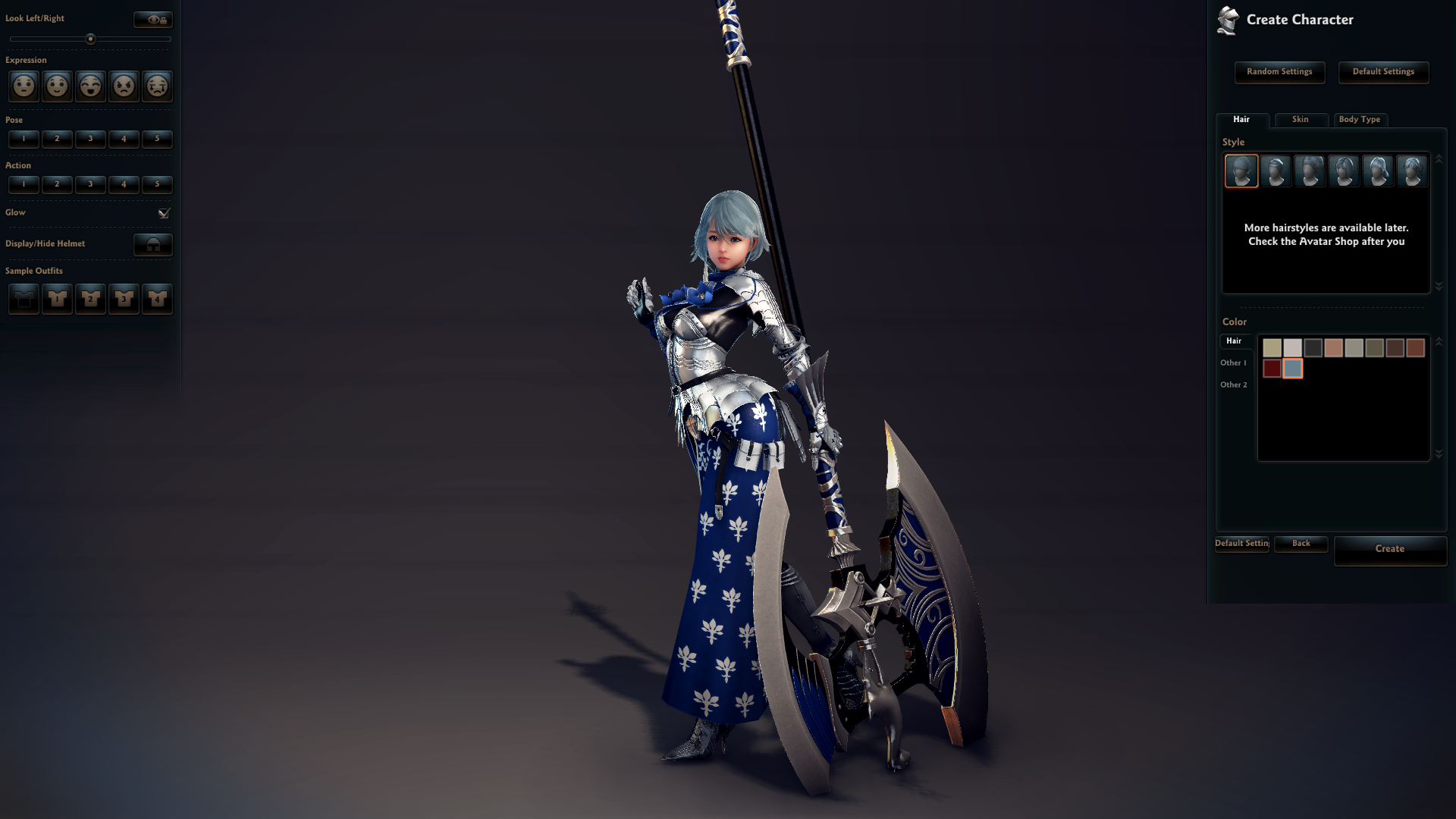 Now that your initial choice has been made, You will see character creation screen. Make sure to take your time, as even though everything can be changed later on, it's not necessarily free. Aside from the looks of the character, at which you will look for hours to come, nothing affects your actual gameplay... except one thing: height.

On the right, there's a Body Type tab which contains few sliders. Height is one of them. This affects following:
* hitbox - the smaller the character is, the harder it is to hit by the enemy.
* range - how far your attacks reach. Exception may be characters that fight at a distance, because longer arms do not benefit them.

Historically, it also used to affect speed - the smaller, the faster. This is no more though.

What should you choose? Depends on the character you have chosen. Personally I'd say minimum height for ranged characters, maximum for others. That's also my recommendation for Belle - she is the smallest character in the game and wouldn't hurt to gain some reach. Furthermore, as one of characters containing counter-mechanics - extra size will be handy.

Once you have chosen name for your character, a prologue will be played. You can skip it if you don't care about the story or already have done it before - simply press ESC key several times to skip the cutscene and then the prologue itself. 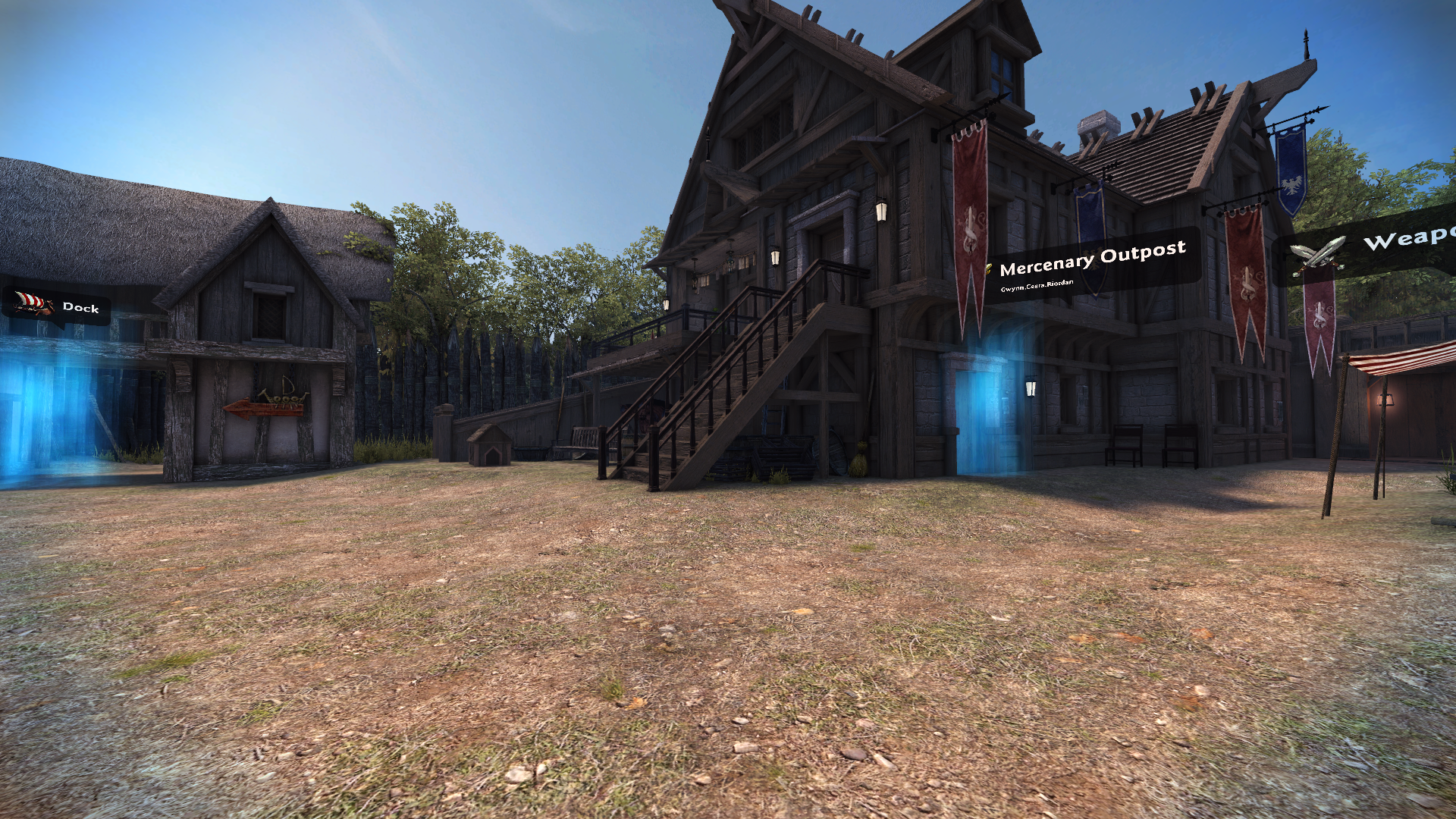 Substorties may be hidden by default, and I suggest to ignore them to speed up progression. 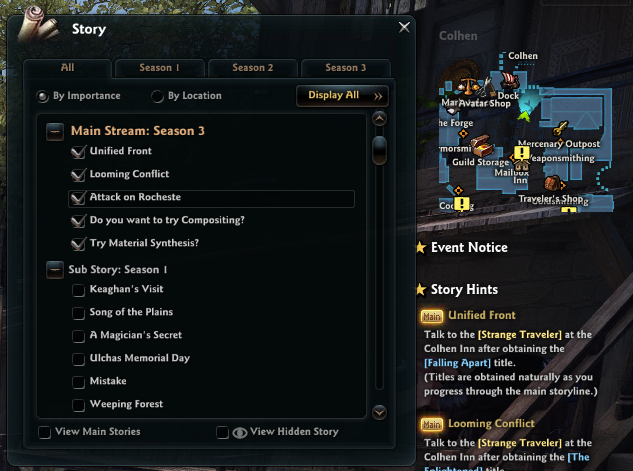 Most stories, but not all, can be also started remotely from the Story window (bound to [M] key by default). It's enough that you click the icon next to it on the list. Remember this - it will come handy in speeding up the whole process, as you won't have to walk so much anymore when available.

Alright, alright! Enough talking! Or is it? Talk to the NPC and claim the story... oh, there will be A LOT of talking. Similar to the prologue part - if you don't care about the story or been through this already, you can skip it. Well, not the stories themselves, but each dialogue - by holding [CTRL] key. As much I like Vindictus' story, this key is your new friend. 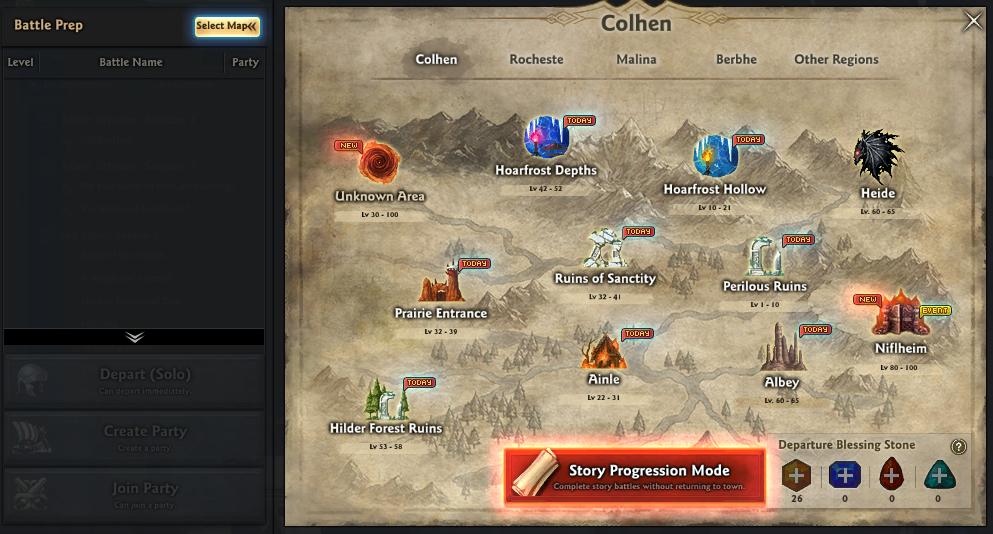 Now you will be guided to go to the docks, to the Battle Preparation board, which contains maps of regions with points of interest. On the bottom of it there's big red button with "Story Progression Mode" written on it. Using this will significantly smooth/speed up story progression, but unfortunately can be used only when playing solo. If you are playing with a friend, you will have to do it the classic way - by selecting region, place of interest and then available battle. Battles on the list may contain tags to guide you if there's a story available for it or not.

Start your first battle. Or in this case - just a training site with "fake" enemies. Vindictus is unique game in terms of combat - it has non-target combo-based combat, meaning you have to get close to the enemy and perform some combination of attacks to get the job done. Most characters follow pattern of "normal" and "smash" attacks, bound to left and right mouse buttons respectively. For this reason, most players describe combos using "L" and "R" letters to describe combos. Some characters additionally have [TAB] for their disposal to perform some action. You and your character just started this journey, and both of you have much to learn. That said, only basic tricks are available at the beginning. Let's see...

Following the mentioned pattern, combos will be described using the letters.

Now that you know how to swing your axe, or whatever tool of annihilation you have chosen, go onwards and complete the task. Going betweenn rooms can be timeconsuming, and this is where sprinting comes handly. Doubletapping movement key, or holding [SHIFT] key by default (personally I use [SPACE]) - your character will start accelerating and run even faster.

Last but not least, you shall know that enemies can strike back. Depending on the character of choice, you will likely perform a dodge or other defensive move when pressing [SPACE] (personally I use [SHIFT] - so run and dodge are reversed from current default).

Here's a short clip showing what we spoke about so far: 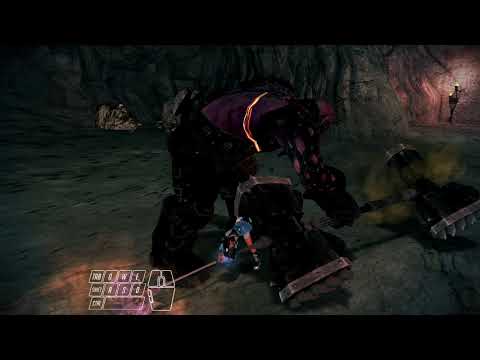 Now finish the battle and continue the story.