Vindictus Rep: 4,580
Posts: 646
Member
May 28, 2018 edited December 21, 2018 in Tech Support
Here's a quick video showing how Ryzen Second Gen cpu's perform in Vindictus while hosting with multiprocessing enabled.
This video contains two ~30 second clips. The first is at stock ram frequency and the second shows the performance gained from a RAM overclock. 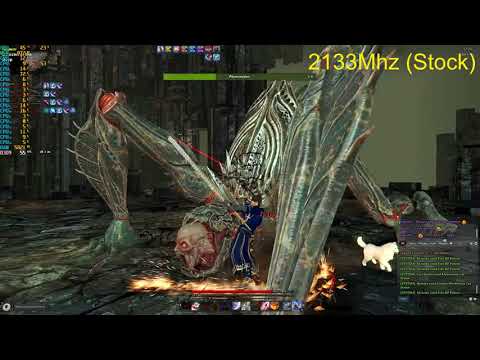 
Capture Information:
Recording Program used: Nvidia Shadowplay
Vindictus is stored on the SSD while videos are written to the HDD.


Thoughts: While there is a performance increase when overclocking the ram to 2933mhz, there is a cost. In both clips the CPU temp hovered around 53-54°C, but the CPU fan was spinning significantly faster with the RAM set to 2933mhz. This is due to the fact that the CPU's memory controller speeds up in tandem with RAM frequency thus causing more heat. It looks like the stock cooler was able to keep up and maintain the same temperature after overclocking the RAM, but the downside was that the CPU fan was spinning fast enough to hear. At stock RAM speeds (2133mhz), the CPU fan is nearly silent.
UPDATE 12/20/2018
Astera Raid Benchmarks at 2133, 2933, and 3200Mhz RAM speed configurations while hosting. Let me give a disclaimer first that the average fps number does not represent the max. In all tests, I did hit 60fps but it wasn't stable and would drop under certain conditions, but the drops never made the game hitch or become unplayable. For example, when Elchulus was all up in my face, my fps would drop but while he was in the air, I would hit ~60. I opted to not record video clips as it might hinder performance. But without further adieu, here's the results. 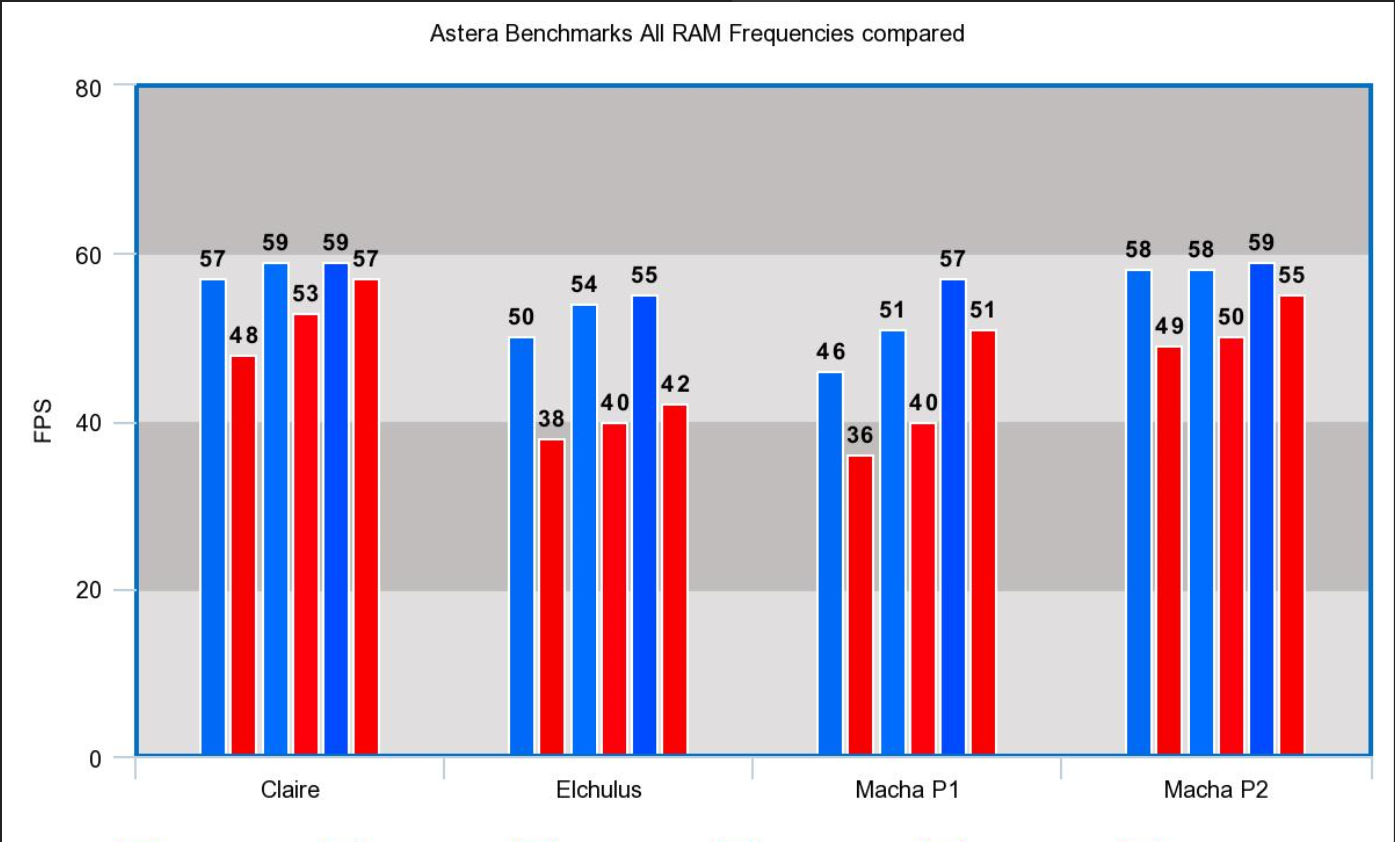 Thoughts
Got some surprising results when testing out all three frequencies. As you can see in all the comparison chart, increasing the RAM frequency helped boost the fps in all tests to create a upward staircase effect.

Claire saw a minimal increase on the average since the slowest speed pulled 57fps leaving only ~3fps to gain and this was easily made up after the first step to 2933Mhz. On the minimum though, increased RAM speed gave a nice improvement. Going from stock to 2933Mhz yielded a ~10% gain while boosting it further to 3200Mhz yielded a ~19% gain over stock.

Elchulus is a demanding raid going by the results. My only guess is that it's partially due to the fact that he's a large boss plus his arena has a far draw distance. Anyways, going from stock, I saw an 8% gain on 2933Mhz and a 10% gain on 3200Mhz when comparing the average fps. The minimums tell a similar story with only a ~5% and ~10% gain at 2933 & 3200mhz respectively. Note that out of all the tests, Elchulus bolstered the lowest score at 3200Mhz.

Macha Phase 1 is surprisingly demanding for it being such a small arena to the point of it having the lowest results of the stock 2133 and 2933Mhz tests. However, this raid saw the biggest gains overall when increasing the RAM speed. Going from stock I saw an ~11% gain at 2933mhz, and a ~24% gain at 3200mhz when comparing the averages. The minimums however are strange as the first jump wasn't too big at only 11%, but the second one was huge at a 41% increase over stock. There's something about the first part of Macha that loves fast RAM.

Macha Phase 2 falls into a very similar situation that Claire did. The average framerate was again already near the top leaving little to no room for improvement. Although the minimums have room to grow because increasing the RAM speed pulled me out of the 40's and into the 50's. Only a 1fps gain after bumping the speed up once, but a 6fps or ~12% increase in minimum framerate over stock.

When I get around to Neam and Balor, I will only be doing stock 2133 testing. The reason behind this is similar to what I explained earlier in this post. Increasing the RAM speed causes the memory controller in the CPU to run hotter, thus making the fan spin faster. This is done automatically at the BIOS level as tweaking the RAM above 2750Mhz causes the fan profile to be automatically "optimized." After extended testing at 2933 & 3200Mhz speeds, my fan profile somehow got stuck. After changing my RAM speed back to stock, the fan would still be running absurdly fast as if the RAM speed was still on an OC'd frequency. I could not override and change it back so my only option was to do a CMOS reset which did fix the issue. Due to the possibility of this happening again, and the fact that I don't wanna potentially reset my BIOS again, I'm electing to only post 2133Mhz results. I will however utilize the above benchmarks in order to create educated guesses on how RAM speed will affect hosting Redeemer Raids. 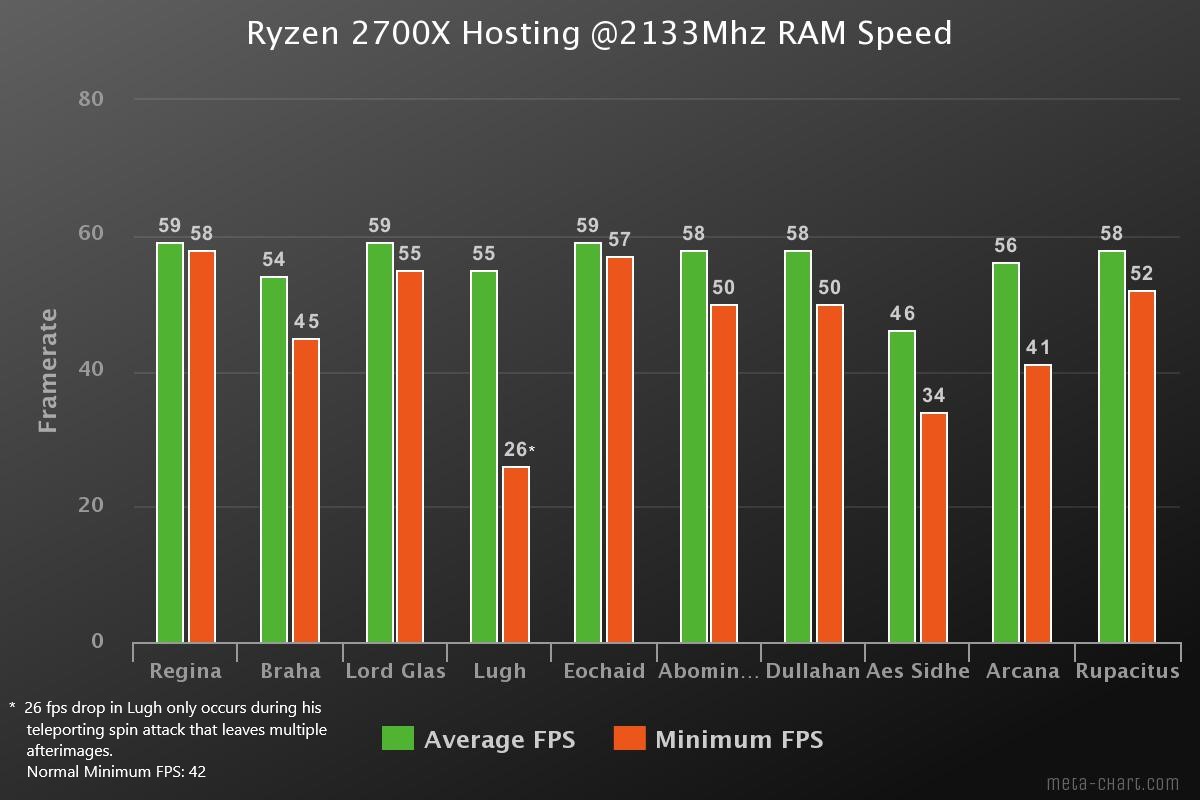 Will rework Astera tests to include all RAM frequencies, average fps, minimum framerates, and percentage gains based on RAM speed increases. Will not be doing video but rather lining up all three screenshots of afterburner's tracked results.

Will do a average/min comparison for all Season 3 raids.

Will condense individual Astera Raid result charts into links and replace with links.

Will add Nifl, Redeemer, and Astera raid results in the form of a chart similar to Season 3 Raid chart.

Will do a repeat of "all" tests when not hosting to show full performance.