This is an Evie-specific guide for getting that super annoying Beokros title. Yes, it IS possible. Yes, it is still difficult, but here's a good start for you other titlehoars like me. Note that this is probably not the only way to get the title, but it is the easiest method that I've found.

How it works:
In order to score a point for the title, the sharp end of an ice shard must hit Beokros in the face. The mane of ice at the top of his head does NOT count. Being an Evie, normal throws will not work, as she holds and throws the ice sideways. However, after her object smash the ice will be thrown a random direction away from Evie. The ice will also always be pointed behind Evie and to the right as it flies away, regardless of what direction it is thrown. This is the key to getting the title. While Beokros is knocked down, you stand near his head with an ice shard and do Evie's object smash. Both the direction the ice flies and how high or low it flies are random, so you will need patience. A lot of patience. It took near 200 attempts to get the 15 hits I needed, but the first 75 or so were experimenting to find the right spot and timing, so your numbers may vary.

How to get it:
You will need a partner with a knockdown SP move, like Cyclone or Terminus. The Vella I farmed with also had a Mysterious Cat Statue to maximize efficiency. While Beokros is knocked down, you need to stand in front of his face and face slightly away. The positioning is extremely precise, and there is a lot of randomness, so it will take several tries to know if you doing it right or not. The window of opportunity is also very small. You need to smash with the ice so that she tosses it during that tiny interval between the end of the knockdown skill animation and Beokros standing up. If it flies towards him, there's a chance you'll score a hit. Refer to the video to see almost 2 minutes of me bashing his face. Only the successful hits are shown. 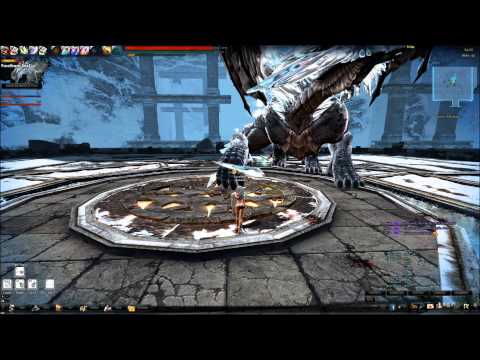