Vindictus Rep: 620
Posts: 8
Member
April 10 edited April 10 in Suggestions and Feedback
I just returned to Vindictus after playing it actively in 2014 in the "late" game and I'm in for around 3 months now. I got lucky on drops, which kept me playing for quite some time right now but ending up in the late game doing the same everyday starts getting boring.
Other People complained already about the Challenge in the game (like bring Hero mode back) and I'd aso like to have a bigger pool of Raids I can do daily and get rewards for it
I would like to explain the reason why I actually stopped at that time and why no much has changed since than and add some of my Ideas how to adjust things.
My plan for this post is to add the link on the Discord and also ask people ingame to add their ideas so we can maybe start a bigger disscussion.

So playing Vidictus right now is spamming S4 raids everyday with Guild/weekly/ Daparture Tickets (13x Siete and 2x the others) and its getting kinda boring after 3 weeks, since its only the same raids every day. Just hoping to get an

Shard drop and be able to finally craft or sell something (Yeah we all know that droprates are terrible).
You could do 300 runs of each and dont get a single drop or you do the raid the first time and randomly drop 2 of them.


I would like to play the game in a way that I have some change/challenge while also knowing that I make progress with my gear. I mean if you look at other games you do things and get garunteed progres. I really like the battle system in Vindictus, but somehow battles are feeling numb after some time. Yes you have the option to do some challenges like Hero Lakiora or Hell Neam/Balor, but there are literally no big rewards (1kk Gold for 45 mins playtime..) and thats why you don't see a random person starting to create the raid or even joining you unless you ask your Guild/Friends. 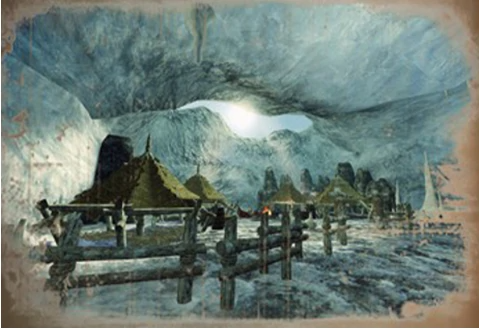 The entire Story put into a single Dungeon which takes Equal the time you would take now for all missions together.
Let's say that you get 1 Map Area, where you have to slay a lot of Small Monsters (Like the old Gnoll Assembly Point, where you had to kill 100 Gnolls, just spawn them in bigger groups, talking about 20-30 at once)
The next Stage you fight Loud Etunoch as a Miniboss. After you defeated him you don't finish the map. The "Boss" will only drop Story items and the NPC Spawns at the edge of the Map. You shouldn't need to load a new Area, the NPC just spawns at the edge of the map after you killed the Boss. (Let's say you need to talk to Gwynn after you defeat the Boss. Gwynn will spawn in the Corner of the Map with a Blue light on it.

Like Season 2 where you talk to Milo at the start of the Map on Cresent Moon Island:

After you finished talking you can proceed to the next area of the map with the Mission to for example defeat Speedy Ekuloch. To not make it like Abyssall Arena you should not make it a lot of Monsters again, so perhaps spawn the Boss immediately with a lot of Small Monsters (but again a lot of them).
The end of the Dungeon should be for example in Hoarfrost Hallow the Polar Bear (you should be able to die if you missplay); this is the Battle that should make each Area feel unique and the Final Boss should actually take 3-5 Minutes to defeat.

After completing S1 Ep.2: Hoarfrost Hollow [Story] you unlock Hoarfrost Hollow [Open Party].
Party Mode
► You can finish the Side Quests/Get Side Quest Drops
► Earn titles that grant you Bonus stats (+STA, +INT ...) if you do specific things (Like killing Raging Ekuloch 3 times with a Kick for Hoarfrost Depths --> old Title)
► Get drops that helps you crafting Gear for the "late game" (not only talking about Enhancement Stones or Damascus Steel, I've also got an idea about creating a secondary set for lvl 105 that is weaker but you can get it easier for players who don't want to play every day in the week for 3-4 hours --> will mention that further on)

The Bosses should also feel like a Boss Monster, so here is what you could change without making big reworks to them:
► Adjust the HP Bars siginificantly (not like you did in the last patch in March 2021) so in S1 Ep.2: Hoarfrost Hollow [Story] you might face an easy version with 10 Bars, that should take you around 1-2 Minutes to defeat but in Hoarfrost Hollow [Open Party] they should be harder, depending how big the Party is (You could perhaps just Copy & Paste the stats from the Ein Lacher and Add some more Damage)
►The difficulty can be selected based on Level (Like old Malina) Level 60-79/80-89/90-100/105 --> You can only enter if you have stats within a fixes Range (Like Raids).
We already saw in 2013, that people will only do the highest difficulty and which new players can't join.
To prevent that you should be able to create a Party if you are in the Level difficulty but everybody can join the Party and will get set their stats to a maximum limited Damage and HP Cap of for example 10k Attack Damage and 5k Defense & 3000 HP (Like the opposite of Royal Army, where you get a minimum of Stats when joining)
► The amount of drops will depend on the stats the player has when joining the Party (before being minimized by the Game), but the drops should have the same piece value on all difficulties, so you can drop stuff for your late game Weapon already early on. --> You get the Low Level Gear from completing Stories.

My idea behind this is to make the Story mode more like a Story Mode and also make the early and mid game feel like a Multiplayer Game for people who aren't on max Level yet. I just recommended the game to someone and he got bored after the first day playing, because it felt repetitive. We need more new people to play this game and this would be an amazing way to make the game more attractive during leveling.

Right now it just feels like: Okay do this dungeon than return. Than do the same dungeon again but with a different Boss that feels the same because it will be one Shot too like the one before.
The worst part of the current system is that when leveling a new character I'm getting annoyed of the waiting time after completing a Battle for the first time very fast (Sometimes it's 120s just standing still). You can fix that by creating the Story Dungeon that takes around always the same time for everyone, where you also practise your combat skills by completing them (Bosses aren't One-Shot).
In Party Mode the Players should have all Skills learned already and have their Gear equipped.

So this is the Idea behind this:
►People who don't play the Game everyday in the week and still want to play the other raids often have to low stats.
►Most of the time you have like the 1 or 2 People who are full gear and just kill the Boss while you struggle dealing Damage.
►You might be able to farm your "Higher" gear just like you do now by spamming Raids and hope for a drop.

What if you are also having an alternative choise to farm weaker Gear, that helps people to get a little "early boost", so you are able to deal at least some proper amount of damage?

Right now you have for example weak Enchant Scrolls like

Soul Enchant Scroll --> You can take the weak Enchant for the beginning and Upgrade into the better later. Could you do that with Armor/Weapons?

So what if you could create alternative lvl 105 Gear that dosent work with Droprates but with the amount you play like Redeemers, you get garunteed progress if you do them.
Lets say everytime you play something on Hero mode you will gain

20 Hero Tickets = 1 "Hero Armor" Piece and 5 more Tickets for a +1 try on a "Hero Armor/Weapon" Piece of your choise.
► The thing is, that you can't sell or buy any alternative gear, so you need to farm it all by yourself.

►You could remove the Travellers Support Package (with the Dulla Armor right now) and introduce the Alternative Gear instead. With the drops you already got from the Story Runs on the Maps you can buy just enough to make proper gear. But players still can choose whether they want to use all of the tickets on the Weapon and keep the old Armor or if they want to make Armor & Weapon or just Armor etc.

Thats just the Basic Idea I had, I will try to share this thread with as many people as possible and maybe we could actually make this into the Game.


Other Ideas I just had:

-Bring back old Raids like An Anchient Race (with the Ravenous Queen) --> Combined with the Rework
-Add Oath of Honor again, Make Bonus Missions more siginficant --> To get Buffs, Bonus drops or whatever might fit (but they should actually be beneficial not like the old one where you get Bonus XP + Gold)
- Phoenix Feather Artifact should prevent One shots like Siete, Agares + give it to newer Players with the Support Box to learn about One Shot Bosses
- Rework/add more interaction (like Balor has the press e thing, Succubus Queen minigame, Old Lakiora Swallow thing...)
- Super Lucky Bonus and Colhen Spirit Explosion? These are just memes I guess
- Make use of Drops like Macha's Wing Feather = for example combine 300 of them into Essence (Bound to player) or something or simply remove them (Chaotic inventory)
Log In Sign Up
Follow us on
Language
English