Disclaimer: I do not have a master degree in CPU engineering, software engineering etc.

Over the years, Vindictus has steadily gotten more demanding as more effects get added, resulting in crippling performance on older computers, even on minimum settings. The game indeed ran perfectly fine on older hardware such as Core 2 Duos, but that was when Season 1/2 was the latest content. Unfortunately, for gamers with older computers, Vindictus is an evolving game and as it ages, it demands more resources. Somehow, this has lead to the belief that GHz means everything and the fewer the threads the CPU has, the better the game runs. This might have evolved from the generally agreed theory that the game is heavily single-threaded dependent.

Another theory I hear get thrown around is AMD sucks, even Ryzen. Yes, they do suck at getting 500 FPS in CS:GO, but for the most part they are plenty good.

But no worries, because today is the day we hopefully clear everything up!

Note: Only relative performance should be considered.

So theoretically, if Vindictus is purely single threaded the E7500 should be significantly faster, however, it turns out the Q6600 actually pushes more FPS than the E7500 95% of the time. We can also see the E7500 is mostly maxed, almost always hovering around the 95% usage range while the Q6600 hovers around 60%. This enforces the theory of Vindictus utilising more than one thread.

Yes, performance is terrible on both CPUs, but we are testing relative performance.

The i5 6600 is the clear winner out of all the CPUs. Multithreading performance is equal to the i7 2600, but it screams ahead in the Cinebench R15 single threaded benchmark and real world Vindictus performance. 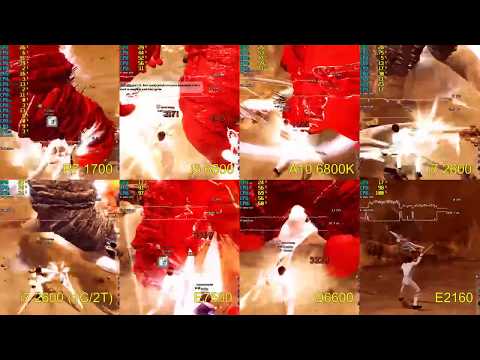