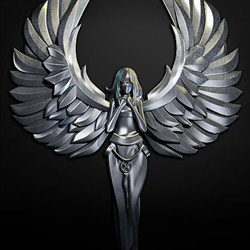 The king, the queen, and their royal brood were all supposed
to be on their merry way to a picnic, except... Delia
Show me what ya got.

Delia, the youngest princess, was playing knight,
forcing her older brothers to fight her.

More than anything, Delia loved swinging her wooden sword.

It made her father, the king, very anxious.

As she grew older, the king begged her to put the sword away.
He tried to take it from her, but she always found a new one.

She ditched her etiquette and dancing lessons
to practice her sword techniques. Desperate, the king allowed her to become a knight,
as long as she also learned how to be a proper princess.

He hoped she would eventually grow out of her knight obsession.

Delia joined a small unit of the Royal Army.

Her captain considered the princess
to be nothing but a burden.

The soldiers felt like they were "playing knight" with
the princess. They found it demeaning.

One day, a soldier accidentally wounded
Delia while training.

The king was furious. He ordered the soldier
to be brought before him.

The others grumbled, saying they knew this would happen.

Before the king could give the command to execute the soldier,
Delia stepped in.

With a grace and shrewdness fit for a princess,
she calmly persuaded the king to change his mind.

In the end, the king admitted he have overreacted.
He gave the soldier a pouch of gold and let him go.

After that, the soldiers saw Delia in a new light.
She was a princess who fought with them, and for them.

Whenever she participated in a battle or expedition,
their morale was boosted.

This was the opposite of what the king
had wanted for his daughter. In one last desperate attempt, the king decided to marry
Delia off to a prince from a neighboring country.

A great tournament was held in celebration of the royal wedding.

The prince strutted into the arena to show off his skills,
but Delia could only roll her eyes.

When she couldn't stand it any longer, she tied up her dress,
grabbed her sword, and jumped into the arena.

In the end, the marriage was canceled.

Furious, the king locked Delia into the castle's highest tower.

In that tower, Delia had time to reflect. She realized she
could never find happiness under her father's thumb.

So on the next moonless night, she escaped.

She left a letter, apologizing to the soldiers
who had come to respect her, and to her father. She ended up in a town of giants.

A tiny girl who visited them alone in a fancy dress
instantly became the center of attention for the towns people.

The laughter grew louder as Delia demonstrated royal techniques for the giants.

A giant handed her a huge sword.

Giant
Here. Our smallest sword.
NOW show us what you can do.

Delia had never seen such a large sword in her life.

Immediately, she was determined to learn how to wield it. Time passed, and she practiced ceaselessly, until she became
proficient with the greatsword. It was time to move on.

She found herself in a town called Colhen,
known for it's mercenary outpost.

She encountered a man outside the outpost,
a man with a familiar build.

He grinned at her.

Karok
Nice sword. Where'd you get it?

Delia told him, and he gave her a nostalgic smile.

They headed into the outpost, chatting.

At that moment, the bell tower bellowed.
Mercenaries poured out of the building.

Delia and the giant followed.

Karok
Ready for your first job as a mercenary?

Karok
We're fellows now. If you need anything,
you let me know.

But there was a smile on Delia's lips as she
pulled out her greatsword.